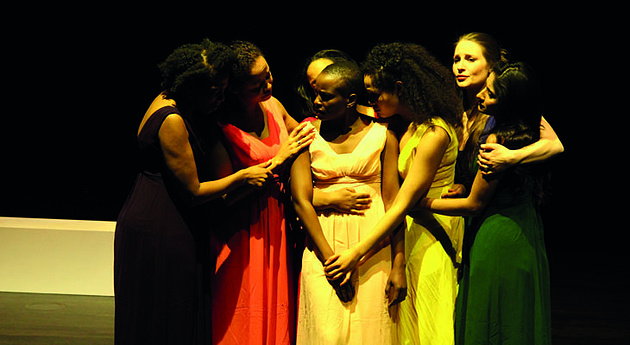 - This show is part of Stockholm Fringe Festival (#STOFFX) -

English
New Nordic Voices presents a packaged series of classic theatre productions that explore selected works of Nordic icons as juxtaposed alongside global south icons. Each production will bear ACT's unique vision of having "Multiple Cultures Sharing A Stage" through a composite inter-cultural mix of performing artists of divergent ethnic backgrounds but all domiciled across the Nordic countries primarily but not exclusively. "for colored girls..." is the first production under the auspice of New Nordic Voices. The theatre piece is performed by a cast of seven nameless women only identified by the colors they are assigned.

Welcome to a Q&A before the performance the 6th september with the cast of New Nordic Voices about the play "For colored girls who have considered suicide/ when the Rainbow is enuf." National Black Theatre of Sweden is joining the talk to discuss their work with NBTS – a consistent platform to African and Afro-Swedish plays, stories and African descent artists. We will reflect on cultural diversification on stage and the importance of intersectional platforms within the cultural sector.

5 days in 13 venues with nearly 100 acts!  Our 10th-anniversary edition offers a wide spectrum of entertaining and brave work created by women, non-binary and trans artists.

With support from Kulturrådet, Stockholms Stads Kulturförvaltning and Region Stockholm.